~what they are and how to survive them~ 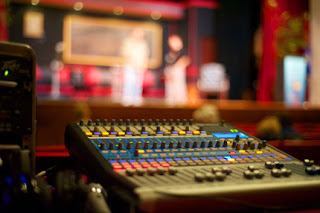 Cue-to-Cue: occurs before the tech run and dress rehearsal of a production. This is when the director (with the light and sound crew) set light and sound levels. Actors or 'bodies' may be asked to stand in certain areas onstage to ensure that they are properly lit, not standing in dark spots as well as delivering some of their lines to ensure any background noises (ie. thunder) does not overpower the actor's voice.

Tech Run: occurs after the cue-to-cue and before the dress rehearsal. This is when the actors go through the entire play with full energy, volume and at the proper speed for the benefit of the tech crew (commonly known as the 'techies' or 'techs'). The crew will ensure (or try to ensure) all light and sound cues are timed properly to coincide with the actions of the performers. Tech runs will include all light, sound effects, atmospheric effects (like fog) and music.

More often than not, a cue-to-cue will take hours to prepare for and sometimes days to get through. All set pieces need to be placed in their proper places to ensure they are properly lit and if the people at the back of the theatre setting the light levels are the same people moving the furniture around on stage, it can be a grueling task.

We all know how actors can get excited, carried away and lost in the magical world of the play they are in. During cue-to-cues and tech runs, it is imparative that all actors are patient and listen carefully to instructions in order to ensure a smooth and drama-free time.

It is also imortant to have fun! I can't say it enough! You can have fun and still listen for instructions from your director or the stage manager. If you have, for example, 30 actors onstage acting as pirates, the stage manager has informed them that they need to reset gunfire sound effects and it could take 5 minutes, the actors should have the freedom to laugh, giggle, make jokes and maybe sing some pirate songs in the meantime. I tip my hat to any director who can relax, laugh and encourage their cast to bond even if it's during a 5 minute black-out during a tech run.

Jokes always seem to come up during cue-to-cues and tech runs whether it's someone in the booth forgetting to let the actors know that the stage is about to be plunged into pitch darkness OR fail to warn them that a sound effect for a large explosion is about to go off, fun happens. As long as the techies, actors, crew and director can work together to communicate, express concerns and laugh; cue-to-cues and tech runs can be a wonderful experience during a production for all to remember.

*NOTE: Speaking from experience, if you are planning on holding or attending a cue-to-cue or tech run that will last longer than 3 hours - please organize a potluck lunch/dinner with all attending. This will ensure everyone is fed, no one gets cranky and forces everyone to take a break around the 3-hour mark when the brain begins to slow down. Everyone knows an actor with an empty stomache can only play "the dead guy".
Posted by Unknown at 11:45 0 comments

A Director's Checklist for the Audition 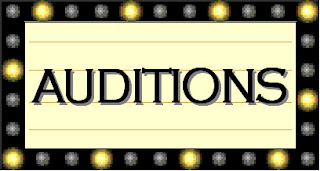 The script has been chosen, the royalties have been paid for and the theatre space has been booked.
Now it's time to find some actors!

PREPARATIONS
-The Director must decide what they are looking for in their actors and narrow down the list which may include any and all of the following: Experience, Willingness to Learn, Compatability with Others, Personality, Reputation, Resume, Physical Appearance as per Characters Described, Ability to Take Direction, Ability to Read/Perform in front of others and Charisma.
-The Director/Producer must book the audition space and pay for it if required.
-Audition Notices should be posted no later than a month in advance in newspapers, mass emails, Facebook, Community Boards and other outlets online.
-It must be decided as to whether or not the auditions will be held on a one-on-one basis or in a group setting and whether or not any part or all of the audition will be recorded or photographed.
-The Director must choose what they want actors to bring to the audition which can be any one or all of the following: resume, headshot, monologue, acting reel, certificates/diplomas or letter of recommendation.
-The Director and Production Team can (if they choose) select pieces of the script to be used in either a group or one-on-one audition and decide whether or not these selections will be available for actors to read prior to the auditions.

THE AUDITION
1. Greet everyone as they arrive and make them feel welcome and at ease
(no one wants to see a paranoid, scared or intimidated actor attempt to audition or recite a monologue)
2. Take pictures of the individual actors if you are doing so.
3. Introduce yourself, the production team, the theatre company & the production itself
4. Verbalize the expectations of actors if they are cast and ask anyone to leave if they cannot meet them
(ie. arriving on-time to rehearsals, attending a certain number of rehearsals/week, being accepting of others regardless race, colour, religion, age, orientation, etc.)
5. Inform actors as to when and how they will be contacted if they are cast.
(I also encourage all directors to contact ALL actors to inform them as to whether they've been cast OR not. This is civil, respectful and is an excellent opportunity to give the actors (who were not cast) feedback as to what they did wrong and how they can improve for their next audition. If possible, contact ALL actors to show them you are thankful and grateful that they took the time to audition in the first place - they may audition for you again)
6. Have the actors introduce themselves to the group by sharing their name, an interesting fact about them, why they are auditioning, their interest in theatre, etc.
7. With all the "business" out of the way, now you can have fun with your actors and start the auditions :)

IDEAS for AUDITIONS
- Start with a group warm-up. This will get everyone on their feet, help them to relax AND you will be able to see how they feel about being up with a larger group.
- Hold a group Improv session. This could be anything from having everyone up at the same time and walking around the room interacting (or not) as certain characters, in certain situtations, weather conditions, or with specific character traits. This is another great way to get actors loosened up and see how comfortable they are with maybe getting a little silly :)
- Have two-five actors stand and read and/or perform a part of a scene from the play. Give them direction as to the characters they are portraying, what has just occured previously in the scene and what their objectives are.
- Have one actor stand in front of the group at a time and either read a monologue or a poem as a specific character from the play.
- Have actors auditioning for a certain role perform a simple action that the character does during the play. Examples: screaming in fear/rage/anger, crying, passing out, shocked gasp, scary face, drunken hiccup, hungover, freaked-out as though seeing a monster, etc.
- Storytelling Excercise: Actors stand/sit in a circle. The Director gives the group a title of the story. One person says 3 words then the person to the right of them says the next 3 words that must continue the story until it has gone around the circle or until everyone is laughing too hard to continue. This is a great activity to see actors interact with and listen to each other.
- Hot Seat: 3 actors sit in chairs side by side. The 2 actors on the ends must compete for the attention of the actor in the middle by any means necessary (within reason) and without physically touching them. This is a great ice-breaker and gives actors the chance to let loose a bit.
- Body Language: actors spread around the room. The director calls an emotion, thought or feeling and the actors situate themselves in a still pose (and without sound) which they think portrays what has been asked for.  The director can then move throughout the room and discuss specific examples of what works and what doesn't and why. This gives a chance for actors to listen, learn and get feedback. This is a great way to promote interactions with everyone present - not just the director.

Whether you are a director or an actor at an audition - ALWAYS REMEMBER to have fun!
Posted by Unknown at 08:37 0 comments