"An Introduction to Dramatherapy"

Dramatherapy (sometimes "Drama Therapy"):
"a type of psychotherapy encouraging patients to use dramatic techniques
to deal with emotional and psychological problems." 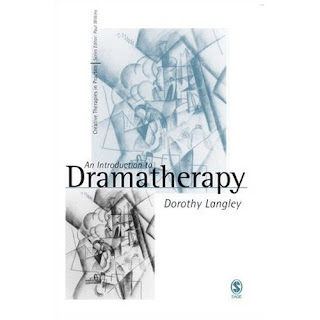 While browsing the Drama section at my local library, I came across this book.  I have read it and am determined to purchase it for my library.

In order to become a registered Drama therapist (RDT), one must attend an accredited school under the National Association of Drama therapists (NADT). There are only 4 universities recognised under the NADT which are in California, Montreal, New York and the United Kingdom.

I have always had an interest in Dramatherapy and try to incorporate methods and concepts into my rehearsals and drama games I conduct with both adults and children whenever possible. Needless to say - living in London, Ontario - I will not become a RDT anytime soon. I am not a registered Drama therapist, I do not claim to be one nor do I call what I do "Dramatherapy". I am simply inspired by the logic behind and the concepts of Dramatherapy.

I wanted to share with you all what I got out of reading this book:

-Start a rehearsal or drama session with a warm-up (duh), followed by a focused activity (ie. based on a specific idea or concept) then bring the session to an end with a cool-down activity/a ritual (ie. a song or dance which ends the session/rehearsal every time).

IMPORTANT:
-always state clear boundaries of space, time & rules
-always use clear instructions & goals that are achievable
-always state that it is safe to play
-explain relevance of each activity

WARM-UPS: sets mood, theme & focus
~warm-ups break the ice, make introductions, prepare body & mind for activity, focuses on the physical being, awakens imagination & creativity~
-Bean Bag Toss (say a name and toss them the bag, gradually add more bags)
-Tag, Red Light/Green Light, Musical Chairs, Follow the Leader
-Balloon Pass (form 2 lines facing each other and lightly bounce the balloon back & forth between partners)
-Run n' Touch (sit, everyone stands, runs, touches something of a certain colour then races back to their seats, leaving one person left in the middle to choose the next colour)
-Scarf? (pass a scarf around the circle, use imagination to turn it into something else ie. a cape)
-Statement (make a statement on the chosen topic/theme ie. if senses is the theme one could share something that they have tasted or smelled in the past)
-Tableau (one person places all the other members into a tableau/still picture then tells a story)

ICE-BREAKERS:
~group cohesion & trust~
-2 Truths & a Lie (in partners tell each other 2 truths and a lie about yourself and see if your partner can pick out the lie)
-One person at a time or in partners describes to the other(s) their happiest place and takes them through an imaginary tour
-the group becomes a car or boat-making team. They must collect items within the space to create a boat/car that will actually be able to move around the room/space

SOCIAL SKILLS
-eye contact while speaking
-sit in circle, one hints to another that they wish to trade places with them only using eye contact
-in partners compliment and say "thanks" back n' forth and repeat
-create a scene on a park bench: one person wants to quietly read the paper and the other wants to chit-chat. How do each deal with the conflict?

AWARENESS OF SURROUNDINGS
-explore room with senses (please don't have them lick anything :) to discover what they see, hear, feel and smell in the room. What do they like the best? What feels nice? What looks menacing? What is humming?
-walk around the room banging and tapping (respectfully) on items within the space. After exploring everything, have each person go back to the thing they think made the "coolest" sound and see if, as a group, you can create a rhythm or song. One-by-one they join in.
-study and observe shapes, angles and objects in the room - then recreate them with your bodies
-Number and name all the colours you see in the room. Which is your favourite & why?

SENSES
-listen and focus on the sounds within the room, then expand to the sounds in the building then outside
-pass a bag with a  textured object inside around the circle and have them guess what it is. They can describe the texture and how it makes them feel (gross, scared, funny, etc.)
-pass around little pots which each have a different scent. Have the individuals share what they think it is and what it makes them think of (if anything)
-get into partners numbered 1's and 2's. Study each other's appearance then have all the 1's leave the room and change one thing about their appearance as the 2's do the same. Everyone comes back and tries to figure out what's different in 3 guesses.
-have individuals think of their happiest place or memory and make a list of the colours in that place/memory. Then have them create a rainbow/abstract piece using those colours (art supplies needed)
-show the group/circle a picture and have each describe what they see and tell a story about the picture

REALITY ORIENTATION
-have a check-in board with date, time, current news & weather
-share with group how you got to the session/rehearsal
-look out the window and state what you see (can use this to create characters & setting for improv)
-look at the clothing that people are wearing outside. What does it say about the weather?

REMINISCENCE & MEMORY
-storytelling around a theme
-story/scene/improv something that everyone knows (ie. a scene from a Fairytale)
-picture display from their past (art & photographs)
-plays/skits & improv surrounding an everyday object (ie. a spoon)
-plays/skits & improv based on experiences of individuals/group
-song/rhythm circle

MOVEMENT
-each person moves around the room expressing their current emotion/mood without words
-imagine your favourite picture or image and create a movement that expresses it's essence. Create a rhythm/dance using that repeated movement
-have the group write their own name in the air and build upon those movements
-in pairs, recreate a task (ie. washing dishes) and turn these movements into a sequence

RELAXATION
-lie down, relax and tense the various muscle groups starting with the face and moving down to the toes
-lie down, breathe in all the good things you would like to absorb, exhale and blow out all the negative things you'd like to rid yourself of

ROLE
-play as/ become another person, animal or thing
-play as/be yourself but in a different place/situation
-isolate something about yourself and create a character around that one thing (ie. Mother)

IMPROV
-walk around the room concentrating on how you feel in that moment. Who else walks like that or who could? Create a character around this walk and give them a name and background/history. Change the setting of the room (ie. into a grocery store) and have all the characters interact as they would in that environment
-everyone are members of a shipwrecked crew on an island. Interact and organise yourself with others to find food and shelter. How will you get home? How do you interact with others? Do you want to go home? How do you interact with the locals?

CREATE A STORY
1-main character & where they live
2-mission or task they must fulfil
3-person or thing that will help the main character
4-obstacle that stands in their way
5-how the main character copes/deals/overcomes the obstacle
6-how the story ends (does it end?)
*individuals may also create a storyboard to help show the group what their story looks like

HOW TO USE STORIES
-told to and shared with the group & reflected on
-told without the ending which members of the group can provide before finding out the original ending
-narrative can be performed by the group as it is read, rehearsed then performed
-members can add/change stories in group/partners before presenting
*stories can be a source of group/individual exploration revealing unspoken issues

DE-ROLING
~getting "out" of character and back to be being themselves~
-sit in 2 chairs (back and forth) one is the "character" chair and one is the "me" chair. While sitting in each chair they state the differences
-place a bucket/chest in the room for individuals to place within what they would like to "keep" from the role they played and a trash can for what they would like to "toss away"
-have the individuals think of ways they would like to "keep" and "toss away" feelings and emotions from the role they played (ie. "keep" it in a locket and "toss it away" by burning it)

CLOSING THE SESSION
-brief reminder that the session/rehearsal is coming to an end
-look towards things that are coming in the future
-concluding ritual (occurs at end of every session/rehearsal)
-reminder & time of next session/rehearsal
-ask individuals as to where they are off to afterwards
-group stands in circle facing outwards, clap, turn to face outwards then leave when they're ready
-restore room to order before returning to circle to say "goodbye" or "until next time"
-stand in circle and one-by-one state what they would like to take and what they would like to leave. After everyone has shared, they may leave
-"Hey-ho, hey-ho, it's off to _____ we go!"

FURTHER READING
"the Healing Drama" by Bannister, A.
"Drama, Psychotherapy & Psychosis..." by Casson, J.
"Drama for People with Special Needs" by Cattanach, A.
"Dramatherpy for People with Learning Disabilities" by Chesner, A.
"Drama Therapy Process, Technique & Performance" by Emunah, R.
"Dramatic Approaches to Brief Therapy" Gersie, A.
"Reflections on Therapeutic Storymaking" by Gersie, A.
"Drama and Healing:the Roots..." by Grainger, R.
"the Glass of Heaven" by Grainger, R.
"the Play's the Thing" by Jenkyns, M.
Dramatherapy, Theory & Practice (Vol. 1,2&3)" by Jennings, S.
"the Handbook of Dramatherapy" by Jennings, Cattanach, Mitchell, Chesner & Meldrum
"Drama as Therapy, Theatre as Living" by Jones, P.
"Drama Therapy" by Landy, R.
"Persona and Performance" by Landy, R.
"Dramatherapy Clinical Studies" by Mitchell, S.
"Discovering Self Through Drama & Movement: the Sesame Approach" by Pearson, J.
"Psychodrama" by Wilkins, P.


Somewhere along the way, we stopped playing,
letting loose and being silly.
Dramatherapy is a safe and supportive outlet
for people to express themselves freely
without fear of judgement or ridicule.
Through laughter and play,
we can heal ourselves from within.


More information on Dramatherapy can be found here:
http://www.nccata.org/drama_therapy.htm
http://www.nadt.org/index.html
Posted by Unknown at 07:38