Words of Advice for Opening Night... 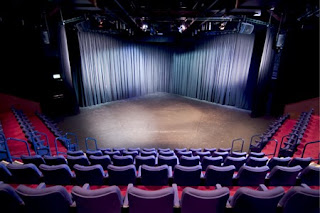 I do not like to give advice unless it is first asked for SO, if you would like some advice on what to do or prepare for opening night - read on; if you do not wish for advice or think you cannot possibly gain anything or expand your knowledge as an actor - stop reading and please remove yourself from the world of acting.
A true actor never stops learning and never stops seeking knowledge. I type this, in the nicest way possible - honestly.

Three One-Act shows are coming to the Arts Project in London, Ontario this Wednesday night (which I am directing & stage managing).  Today (Sunday) we had our first full run of all three shows and it was uplifting to have so many actors and crew members show-up on time and ready to go - EARLY.  Lines have been memorized, costumes have been purchased, blocking has been rehearsed and permanently imprinted onto the brains of the actors, now, the actors have a few "last minute" homework assignemens and items to keep in mind.

#1. As an actor, you WILL deliver your lines faster than you have been duiring rehearsals.
This is for three main reasons. One is that your brain creates adrenaline which makes your blood pump faster and your heart rate increase. Your brain does this so that your body has enough energy to maintain the performance in front of an audience without passing out.  "Theatre is an exagerration of life" and as such, your body needs more energy to keep up with your larger-than-life actions and your louder-than-usual voice. The second reason is due to the reactions of an audience.  When an actor has been rehearsing the same lines for months, they quickly forget which lines are funny or may get a laugh. The first time infont of an audience soon reveals the jokes that have been long forgotten.  It is only natural to want to keep that laughter going, so, an actor will try to make other lines funny. As it is uderstood that comedic timing is quick and without pauses, an actor can unintentionally lose pauses where they have been during rehearsals.  The third main reason is the most obvious one - nerves. When performing infront of a live audience and when awaiting your cue to go onstage during a show, it is only natural to get excited, nervous and anxious.  This also causes lines to be delivered quickly.  My first tidbit of advice to actors is to be aware of this and prepare to deliver their lines slower than usual. If an actor intentionally delivers their lines slowly, they will most likely deliver them in real-time once they're onstage infront of a live audience.

#2. Don't Panic but something WILL go wrong.
As much as you try to prepare ahead of time and as often as you rehearse a play - something will not turn out the way you've planned or rehearsed - it's inevitable.  Whether someone forgets a line, skips ahead in a script, misplaces a prop, the lighting cue isn't on time or a sound cue lasts a few seconds longer than it should - deal with it.  This is community theatre people and it is rare to have a "perfect production".  As I stated, don't painc.  As long as an actor prepares as best as they can ahead of time and as long as the cast & crew supports each other NO MATTER WHAT HAPPENS, you can ensure a pleasant evening.  The biggest piece of advice I can give regarding this is the following: "If you mess up but the audience didn't notice you messed up - you didn't!".  The show must always go on and if you can maintain your character and push through whatever obtacles may come your way AND if you ensure that the audience leaves satisfied - you have done your job and done it well.

#3. It's hard to believe BUT - you might "Over Act"
As an actor, you have rehearsed until you were blue in the face and all the while during rehearsals, the director has drilled into you NOT to over-act or upstage the other actors on stage with you.  In a nutshell, upstaging or over-acting means making your character louder, bigger and moreso the primary focus compared to the other actors onstage. THIS IS BAD. Actors should always keep in mind what Harry Edison once told me, "an actor should aim to be a player in the best play rather than be the best player in a play." You only shine as bright as the weakest actor in a production and though you KNOW this and try so hard NOT to do this - come opening night - you might.  This is due to hearing the first laughs and getting the first audible feedback for all the work you have done leading up to your first production. Don't let it go to your head! Stand your ground and try to remember that you are playing to the script rather than playing for the laughs.

#4. Try not to get ditracted - it's harder than you think
Many actors believe they have rehearsed so much and put so much work into their characters and lines that nothing could possibly throw them off their game. They're wrong.  No actor can prepare for someone in the front row sneezing so violently that snotty spray hits them in the face or someone's chair in the back row breaking and forcing them into someone else's lap. These are exagerrations of course but let me tell you - something may and probably will distract you. Actors should review their scripts during the run of a play - it can't hurt. And though you think you know everyone else's lines as well as your own, you never know when a situation may arise when it is you who must give another actor their cue or nudge them to say a certain line because THEY got distracted. It happens! If you think nothing can distract you - maybe you're right BUT chances are, during the run of your show, someone WILL get distracted and as an actor you WILL have to save their chops. That's one of the main difference between theatre and film by the way. NOTHING gets edited out. Work as a team to make sure everyone in the production looks good - not just you.

#5. Have fun
No one you know might show-up to see the show, a prop may go missing or worse - explode, an actor might show-up with a sudden serious case of leringitis and can only speak in a whisper, the lighting guy might go missing 5 minutes to curtain and a critic might be in the audience on the night that everything goes wrong.  It is during times like these that we all must reflect on why we got involved in the first place.  Whether we're involved with theatre because it gives us pleasure to make people laugh or we want to be a part of a supportive group working towards the same goal. Whether we need to be infront of an audience for attention or we need a break from our hectic lives (the kids, the bills, the wives, etc. lol). We are involved with theatre to give an audience the opportunity to escape and to have a night away from it all.  No matter what happens, we as the cast and crew of a production owe it to the audience (and to ourselves) to ensure that the show goes on and that everyone has a good time.  At times, it may be hard to smile and "sluff it off" but for the run of the show, we must all stick together, support each other and make sure we all do the best and deliver the best we have to offer.  If you see the director pulling their hair out, the stage manager pacing backstage or an actor biting their nails and hyperventaliting - give 'em a nudge, a hug or words affirming that they are doing a great job and that you're in this together.

To the cast and crew of "An Out of Sight Night" opening this Thursday at the ARTS PROJECT - break a leg!
Posted by Unknown at 19:43

Email ThisBlogThis!Share to TwitterShare to FacebookShare to Pinterest
Labels: advice for the actor, an actor prepares, arts project, Harry Edison, have fun, opening night, opening night advice, out of sight night, out of sight productions, over acting, WODL