Time Flies When You're Having Fun!... 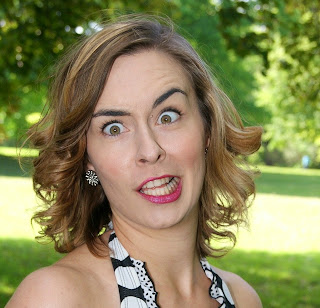 Photo Credit: Jeffrey Reed
It is hard for me to believe that my last post was in February of this year - WOW!
SO, before I get into some wonderful news about upcoming workshops at the Grand Theatre in London, Ontario and auditions for a comedy in January - let's catch-up a bit.
Let's start at the beginning.
I directed Swing Dance at the Palace Theatre in February, 2013 and we had a blast! 4 actors (plus the chicken delivery boy). A play about 2 couples getting together for dinner to discuss a Swing Club. Only one couple thinks they're talking about a dance club and the other couple is talking about a Swinger's Club! So funny! 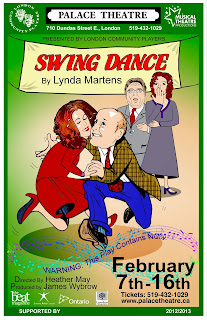 I was a member of the GAB Artists Collective at the Grand Theatre working with the talented Jack Grinhaus from "Bound to Create Theatre". While there, I had the opportunity to watch each mainstage production at the Grand Theatre for the Season and give feedback in an open discussion group with the audience and fellow GAB members. This truly was a learning experience and I am very grateful for having the opportunity to be a part of such a group. 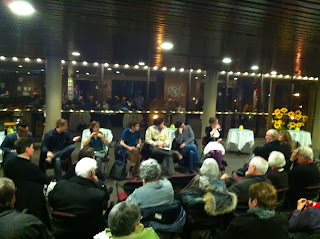 I designed and painted a skate which sold for over $300 at a fundraiser for the Arts Project Gallery & Theate in London, Ontario. It was signed by the competitive Olympic skaters, Aliona Savchenko & Robin Szolkowy. 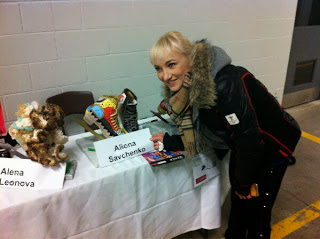 I portrayed a character which eventually was diagnosed with Cancer and past away in a production of "Delilah" which was a very powerful, challenging role that will forever hold a special place in my heart. Special thanks to the playwright, Len Cuthbert and director - Desiree Baker. 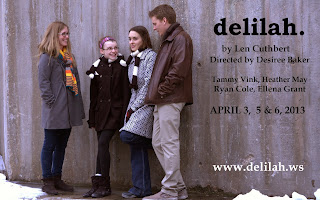 I went to Vegas with my husband (which I never thought in a million years would be a place I'd want to visit) and we actually had a lot of fun. 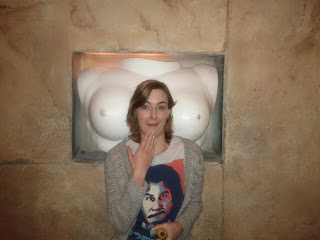 I directed "Six Funny Ladies" in May, 2013 which was presented at the Arts Project and taught me a lot about casting, trust and having a crew you can depend on. Todd, Kevin & James - the show couldn't have happened without you! 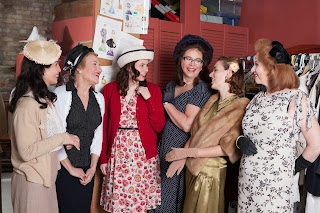 ﻿
Photo Credit: Rob Cousins
I participated in the Corporate Challenge Fundraiser for the Sunshine Foundation with the Murder mystery Troupe I work with , |Murder for Hire. Check-out the company website and contact Kay Rogers if you are interested in acting with the group! www.murderforhire.ca
We have a blast every year and This year, we were in the top 3 fundraising groups! Whoot! 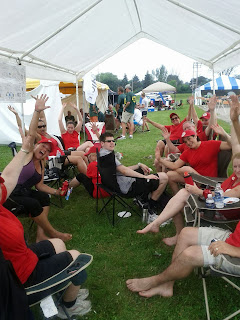 I was an extra in a country music video for the song called "Farm Boy" by the River Junction Band. Check it out and see if you can spot me ;) I'm about 1min & 14 seconds in sitting between the 2 guys. http://www.monologuegenie.com/serial-dater-monologue.html
I was also in a commercial for a new Bingo game called "Taptix" - I'm the girl whistling ~ check it out! http://www.youtube.com/watch?v=mbPEP-Y3j94
I started a 3-5 year program at Fanshawe College for Landscape Design. I know. I must be crazy!
I played several characters in the original play called "All Aboard" written by Dr. Colin Forbes about his years as a car porter on the Canadian National Railway in the 1940's. What a blast! I loved playing so many characters and switching from one to the next quickly by simply changing hats. It was a blast! Enjoyed working with the cast and the talented director, Jason Rip. 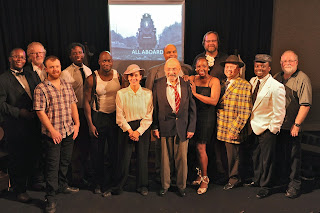 Photo credit: Ross Davidson
I was cast as two different characters in a film called "Terry's Car Gets Stolen". I had a blast working with the crew! I got to play a hippie and an undercover "dancer". So much fun! Check out the trailer, info and pics here: http://www.indiegogo.com/projects/terry-s-car-gets-stolen
I attended a production of "1-900-DEE-LITE" in Aylmer, Ontario and I loved it! Very funny script about a mother who works as a "phone sex operator" to pay the bills. Super funny! Great job Kevin and Laurie on your performances!
I saw a production of "TOMMY" in Stratford and I think it is possibly the second best play I've ever seen next to a production of Peter Pan I saw in Niagara-on-the-Lake at the Shaw Festival Theatre. If you have the chance to ever see this play - GO!
I just finished directing an original script called "DUEL LOVE" at the London One Act Festival which won Best Actor, Best Supporting Actor and Outstanding Production. Alan Sapp was the adjudicator this year and I feel I learned a lot from his adjudication and workshop. We also got a special mention for our "screaming man in the shower" and our princess who was a "nice piece of A**" (which is what the card read - prob'ly filled in by a friend of hers). Princess Bride meets Monty Python in this extreme comedy and we had a lot of fun putting it on. Hopefully, this play will come back as a film or a full-length play in the years to come.

NOW that everyone's updated as to why I might have been a bit distracted from my blog posts - here's what is coming up!:
A Workshop is coming to the Grand Theatre at the end of this month by Theatre Ontario. Get your tickets and attend this if you can! http://www.theatreontario.org/programs-and-services/courses-and-workshops/collective-creations.aspx
AUDITIONS for the next Maybles' Productions will be held in January for "SYLVIA" written by A.R. Gurney. This play requires FOUR actors (2M & 2F). The roles are as follows:
1 male actor ages late 40's-60's, busy business man at the onset of a mid-life crisis
1 female actor ages late 40's-60's his wife, career-oriented
1 female actor ages 20-early 30's, young and attractive, physical comedy and ability to move & sing are required
1 male actor ages 20-60's, must be able and willing to play a man, a woman and an individual who's gender is unknown.
This is a comedy about a man, his wife and the dog that comes between them. Comedy with a touch of heartfelt compassion - this play will have something in it for everyone!
Until next time, stay funny!
-Heather May
﻿
Posted by Unknown at 17:37 0 comments 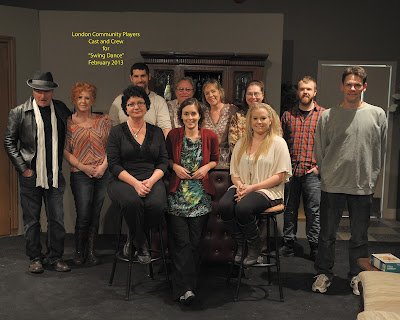 ~all photographs courtesy of Ross Davidson~

This play written by local playwright, Lynda Martens was an absolute gem to direct.
This was the World Premiere of "Swing Dance" and only time will tell where it goes next.
It was produced by London Community Players in Procunier Hall at the Palace Theatre in London, Ontario.
It ran from February 7th - 16th, 2013.
It had it all! The characters were believable, their plight was heartfelt and the situations they encountered were ones the audience would NEVER wish to be in themselves.

Vicky and Walter have been married for close to 40-ish years. During this time, Vicky has stayed at home. She's done the laundry, raised the kids, cooked the meals and kept the house clean. All the while Walter went to work each day. Now, Walter is retired, the kids have moved out and Vicky has started her own business. Suddenly Walter doesn't know what to do with himself and decides to make the rest of his life about Vicky and wants to spend every waking moment with her. 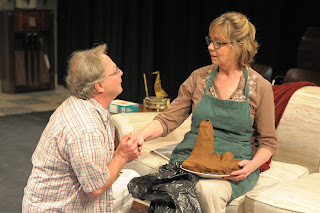 Without giving too much away, Walter takes drastic measures to get closer to Vicky - pharmaceutical measures. But Walter has forgotten one important detail. Company is coming over for dinner.

Sally and Fred arrive just as the "magic" kicks in for Walter and chaos ensues. 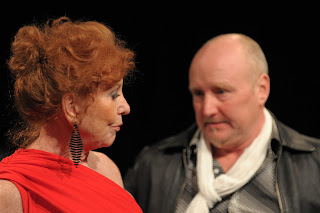 Fred is Vicky's new business partner and Sally is Fred's sexy and confident wife. Though this lovely and apparently strong couple claim to be coming over for dinner to discuss the new business partnership and Vicky's Swing Dance Club ~ it turns out there was a miscommunication. Somewhere along the line, Sally and Fred thought Vicky meant a Swing Club. NOT a Swing DANCE Club.

What follows is a collection of awkward moments between the two couples as one thinks they are discussing Swing Dancing and the other SwingING.

This is a hilarious play that I believe left every audience member a little happier when they left after the curtain closed. 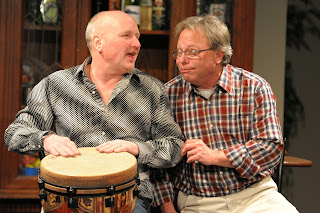 The script and actors had the audience roaring with laughter and the play sold out every night except two!

I enjoyed every minute I spent with this cast and crew; I look forward to seeing where this play goes.