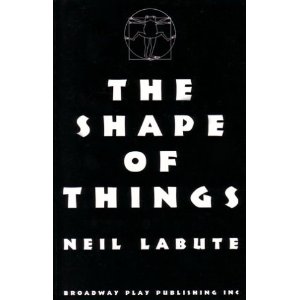 I recently finished reading "The Shape of Things" by Neil Labute and the words and characters have still managed to remain on my brain.  Though the vocabulary used within this script is quite simple, the messages portrayed are far from juvenile.  This play will mean something different to each person who reads it.
It was first published in 2001 at the Almeida Theatre, London.
It has four main characters: Adam, Evelyn, Jenny & Phillip.
It takes place in various settings around an arts college in a conservative Midwestern town.
This play could be produced in a small black box theatre to create intimacy between the actors and audience members but the scene & set descriptions are very vivid and I could also see this piece produced for film.
It HAS in fact been made into a movie. See the clip here: THE SHAPE OF THINGS 2003
It is a story of how far one can go in the name of art.

The story opens in a museum. There is a tall statue of a nude man in the center of the room wearing nothing but a leaf covering his genitals.  A woman (Evelyn) is giving off a vibe that she is about to do something to the statue.  A security guard enters (Adam) and he is wearing an old jacket, his hair is slicked back and is described as "bulky".  Evelyn, is an artist.  She believes that art should make a statement and make people think.  These two characters end up falling in love.  At least, HE falls in love with her.  Both of these characters have very different goals in mind as to the outcome of their relationship.

During their 18-week relationship, Evelyn drops little hints to Adam such as "you shouldn't style it so much.  Your hair.  Just let it go..." and "it's cosmetic, not corrective...it's no big deal. I promise..." pertaining to him getting a nose job.  Throughout these 18 weeks, Evelyn manages to change the way Adam looks, feels, acts and even thinks.  He throws out his favourite (but tacky) jacket and thinks it was HIS idea.  He goes under the knife and has a small amount of flesh shaved from his nose and THINKS it was his idea.  He also starts jogging, toning and losing weight all the while recording everything he does and thinks into a journal which he ALSO thinks is HIS idea.

Without giving the actual ending away, I will close this post with this:  "The Shape of Things" forces the reader to make up their own mind about what ART is to them.  Is it about making a statement? Making people think? Making people feel? Is it about showing something people don't often get to see? Is ART about opening a window into hidden rooms and forgotten dark closets?  This is a script which plays both sides of the "Morality Coin".  If one is able to create a piece of ART that will challenge humankind and our ways, just how far is too far? Is is ever okay to cross the line between right and wrong in the name of ART?
Posted by Unknown at 07:40