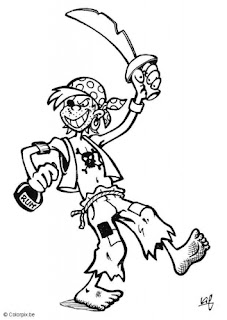 In Ken Ludwig's version of Treasure Island, there is a character by the name of Jemmy Rathbone which I have the pleasure of portraying onstage at the Palace Theatre in London, Ontario in February 2012.
I was surprised to find little information about this character online. I only found two movie clips which were far away and out of focus.  I found a review which stated "the opening scene with all the pirates chasing Jemmy around the ship was action-packed" but that's it! I was unable to find a character background, history or even a description.
With the help of a book called "the Intent to Live" by Larry Moss, I have worked through questions and homework and created my own version of the infamous Jemmy Rathbone. I wanted to share these with anyone else out there who might be researching and preparing to portray Jemmy onstage.
I have placed the information I created into an 'interview' format with the questions being asked by Larry Moss directly from his book and the answers given by Jemmy himself.

WHERE DOES YOUR SCENE TAKE PLACE?
O' course it toikes place on a bloody ship! It's rainin' and da wind is blowin' a good one and da thunder is louder then I e're heard it before. The waves crashin' against the side o' the ship tossin' us about.
WHAT DO YOU KNOW ABOUT THE OTHER CHARACTERS IN YOUR SCENE?
Nasty, back-stabbin' swabbers they are. They be yer best mate one day and yer worst enemy the next. Best be careful who ye tell yer plans to or they be usin' it against ya in your weakest toimes.
WHAT DO THE OTHER CHARACTERS SAY ABOUT YOU?
They have the nerve to fink I'm a cheatin', lyin' pirate who took somefin' I didn't and was gonna partake in the riches wifout keepin' me mates in the 'know'!
GIVEN WHAT THE SCRIPT SAYS, IS IT TRUE?
Yeah...d'ere prob'ly roight.
WHAT DO YOU KNOW ABOUT YOURSELF WHICH IS RELEVANT TO THE SCENE?
Well I'm not sure what "REVERENT" means but I do know vat I'm a sneaky guy. I prob'ly fink I'm smarter than I really am. I can also tell ya dat I was on the streets as it were before I got me chance to prove meeself as a man o' the sea. To be straight wif ya - I'd prob'ly do just about anyfin' to get me hands on some gold 'r jewels of any koind.
WHAT DO YOU LITERALLY DO DURING THE SCENE?
I kant tell ye dat - I've sworn an oath to keep da secrets of the happenins which go about.
WHAT DO THE OTHER CHARACTERS DO TO YOU IN THE SCENE?
Well I kant bloody well tell ya dat either now can I?! ...unless you got a good 'mount o' gold yer ready to part with...?
WHAT IS YOUR POINT OF VIEW AT THE TOP OF THE SCENE?
Uh..I'm confused. Can you say da question wif different words or somefin?
OKAAAAY WHAT WERE YOU THINKING AT THE START OF THE SCENE?
Why didn't you just say dat in first ploice?! I was watch dat noight loike I am most noights. I wasn't tinkin' much but how angry da sea was and how the skies were makin' such a racket that it couldn't mean anythin' good was gonna happen anytime soon.
HOW AND WHY DO YOUR THOUGHTS CHANGE?
They don't! Nothin' good DOES come from that noight and don't wish to talk about it no more!
WHAT DO YOU WANT?
I already told yer that Larry, I want me some gold! But gold ain't any good to ya if yer dead so I guess I want to come out of this alive and able to spend me some gold. Go to port in me homeland and buy a drink or two for a special lady...or two. You know what I mean roight Larry? [nudges him]
NO. I DON'T. [sighs] DO YOU HAVE ANY PHYSICAL IMPEDIMENTS?
You makin' fun o' me knees Larry?! So I ain't as tall as a normal man would be i s'pose but I be fast! Faster than the rest o' these bloakes on this ship! AND, lemme tell you somefin' else! I be the best fighter on this here ship as well!
WHAT PIECE OF MUSIC WOULD YOU PICK TO SYMBOLIZE YOUR CHARACTER?
Oh, you mean loike a theme song? I've always wanted me own theme song...lemme think...well I s'pose if I were a ballerina or somefin WHICH I'M NOT it would be the "Flight of the Bumblebee" but NO I be a sneaky little pirate with a lot of speed and talent with me fists SO, me theme song would have to be the song from the epic scene in Wizard of Oz when the witch sets the flying monkeys on Dorothy and her little friends. She had it comin'.
CAN YOU DO AN ANIMAL EXERCISE TO HELP INTERPRET YOUR CHARACTER?
What the heck is ZAT s'posed to mean?! You comparin' me to an animal dere Larry?! Is ZAT what yer doin?! So I'm a bit like a rat but that don't mean I don't have feelin's and aren't sensitive to those kinds o' remarks Larry! This interview is over! You wanna see more o' Jemmy Rathbone you come see Treasure Island at the Palace Theatre in February 2012. I've enough o' this badgerin'!
Posted by Unknown at 08:17