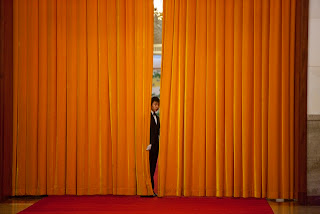 ~Stepping up to the stage door on closing night, you take a deep breath in and shake off the nagging thought reminding you that tonight will be the last time you perform on this stage with these actors.

You have rehearsed with them for countless hours in a room, you've run lines with them over coffee, you've gone out for beer or martinis together to reward yourselves for a good rehearsal/night or show.

~Heading backstage to ensure all your props are in their proper place (like you should be doing every performance night) you find, this time, it's different. Each item you pick up and put in it's place seems to speak out to you and say "don't put me down; don't let go of me."

You have rehearsed with various swords, guns or props but you've been assigned certain ones that only YOU touch and only YOU keep with you when you go onstage. These props have not just been part of your costume, they've been a part of the person you have created and shared onstage.

~Entering the Green Room, you make sure the coffee is on and grab something to nibble on before heading to the change room. In the changeroom, you put on your costume piece by piece, little by little to savour this last time you will put these items on.

A costume represents different things to different people. To some it is just an outfit you put on to look like someone (or something) else. To others it is part of a system which enables you, the actor to forget about being "you" and focus on creating, becoming and maintaining a portrayal of someone else. You have been this person for months and on closing night, it may very well be the last time you portray that person.

~Act One begins and you are either onstage, in the wings or in a changeroom listening to the action over a speaker. Rather than talking with your fellow actors backstage and joking around (as much as you usually do), you find yourself listening to and hanging on every word that is being spoken. You are paying attention to the words and also the actor delivering them. You take this opportunity to appreciate their work one final time.

Closing night is often filled with cards being passed around for people to sign, pictures being taken, hugs being shared and some tears. Sometimes closing night also means "closing night pranks" (which I will get more into in a future post). Pranks should never change what the audience has seen onstage, it should never be done to an actor who you do not feel could "handle it" and it should be fun AND respectful to the actor being played. These pranks, I like to think, are more like last night fun. A little something for the actors to share in, laugh about and to become part of the story and journey of that production.

~Act Two finishes and you wait in the wings for your time to step onstage for your final bow. You want to savour the applause and cheers and also that moment when you share the stage with your entire cast. It is a strange feeling on closing night when that curtain closes.

Usually, once the curtain closes, all the actors quickly run offstage to the changeroom to get out of their costume and back into their own clothes so they can go out to the lobby and see their fans who came to support them. On closing night however, the curtain closes and none of the actors move. They all stand still in their place facing the curtain. Slowly they turn to each other to congratulate their fellow actors on a job well done before finally leaving the stage.

~After taking your final bow, you leave the stage and place your props back in their final 'resting places'. As you place the various items down, you hold them for a moment to appreciate them and the journey you've shared together. You take off your costume and place it in a pile or bag with everyone else's costume to get washed and, although it's "just a costume" you say Goodnight or Goodbye to that character it represented - forever loved; never to be forgotten.

Once the stage and theatre have been cleared, the actors usually go to one of the actors' homes for the cast party where their is much food and booze. It is a fun time when all are together, sharing jokes, telling stories of things that happened both onstage and off. Fun awards might be handed out to acknowledge each actor and crew member for their hard work. Some people leave early, some people leave a little later, and some people get so smashed that they don't remember their names, where they are or how they got there and end up staying the night :)

In the morning however, no matter how hungover (or still drunk) the actors are, they come together one last time for the sometimes dreaded "strike". This means everyone involved in the production comes back to the theatre to take down the entire set and clean up the mess. Depending on how large the production was, it can take an entire afternoon.

~The set has been taken down, the garbage is put out, stage is painted and the green room is sparkling. Now the actors say goodbye.

It's bittersweet to think that your body will have a break and you'll be able to go to bed at a decent hour but, in exchange, you will no longer be coming to that stage door and sharing a stage with people you have come to trust, admire and love.
Posted by Unknown at 06:04