"Do or do not, there is no 'TRY'" - the Director has Absolute Power 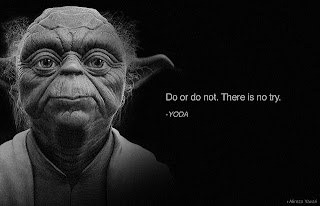 It is so exciting to be cast in a production which has a well-known and distinguished director calling the shots.  You've heard of their name, you've researched their work and you are THRILLED to have to opporunity to work with such a passionate and dedicated artist.

I had been looking forward to working with one director in particular who in my mind's eye reminded me of Yoda - wise, experienced and it was he would teach me the ways of being a Jedi Actor!

And then, I met them.

I do not want to say that ALL directors have egos or that they think of the cast and crew of their shows as "the little people" BUT, in my experience, the directors I HAVE worked with, have been oblivious to the lifelong impression they leave and the absolute power they hold over the actors.

Many would like to assume that someone who has won many awards and has produced and directed many shows all over the world, would be passionate about theatre, would be caring towards their actors and would want to teach AND learn from them.  This is not always the case.

I cannot stress enough how heartbreaking it is to hear a Director say, "you're doing fine."
I don't WANT to do FINE I want to do GREAT!  As an actor, I do not mean to bother a director by asking them for criticism or their thoughts on a particular piece which I've performed.  My intentions are rather completely selfish - I want to learn and grow and do better.  We as actors do not carry a mirror around with us onstage so we rely upon the eyes of the director to watch us carefully, take notes of our every move, our emotions, our body language and voice projection.  It would be better, for an actor, to hear
"next time - I would rather you try this than that" or
"I really didn't like when you did this, have you thought of trying this?" than
"you're doing FINE."

A director holds the absolute power when it comes to actors' egos, self-esteem and passion.

Being an actor in a show also means being in a relationship with the director.  The director can either love and support their actors, pay attention to them, give them the constructive criticism they need so they can be the best actors they can be or - they can ignore them, not give them the attention they deserve, crave and require, praise others infront of their face and dangle them like a gold medal, making them feel as though they can never achieve greatness, talk down to them and make them feel like their questions in search of knowledge are "below them" and frivolous.

A Director can inspire and open an Actor's mind or they can obliterate their passion and break their heart.
Posted by Unknown at 19:24